The mountain bandits laughed aloud as if they had just heard an extremely funny joke. However, the third boss sensed something terrifying from Li Qingshan and could not laugh.

The head fell to the ground, and the bowstring was fully drawn.

“Die!” Li Qingshan attacked in an instant. His furious roar could not drown out the thrum of the bowstring as it trembled. The arrow shot towards the third boss along with his surging anger.

With a flash, a tremendous force launched the third boss into the air slightly. Afterwards, he hit the ground heavily.

The force of a three stone bow was startling great. Li Qingshan had completed all of his movements in a single stroke. At such a close distance, only second-rate masters and stronger experts had a chance at dodging it. Clearly, the third boss was not one.

The noisy village immediately quietened down. The eyes of the mountain bandits all widened as they struggled to believe what they were seeing. A half-grown kid had killed the mighty third boss.

Meanwhile, the villagers all looked at Li Qingshan like he was a god. To them, these mountain bandits were terrifying fiends, while the third boss was the leader of these fiends. Li Qingshan truly seemed like a god to them since he could instantly kill the third boss.

Despite the reversal of the situation, Li Long showed no delight; there was only fear.

“Third boss! Third boss!” A few bandits gathered around the third boss. The third boss coughed up a mouthful of blood and pointed at Li Qingshan with a vicious expression. “Kill him!”

He was a third-rate master after all, so he could react instantly. Although he failed to dodge the arrow, he had managed to prevent it from hitting a vital point. The arrow pierced his right arm, shattering all the bones nearby. His right hand was basically crippled. As a result, his eyes were bloodshot; he wanted to swallow Li Qingshan alive.

The bandits responded and drew their blades, spears, swords, and halberds. All of them charged at Li Qingshan as they yelled out crazily.

There was a swift breeze from behind him, and a javelin fell towards the back of his head. He did not even look back, tilting his head slightly to the side and grabbing the javelin. He turned around and threw it back. The javelin returned with ten times the speed, nailing the bandit who had launched the sneak attack to a door.

A square halberd1, a broad blade, and a red-tasseled spear stabbed at him simultaneously.

Li Qingshan gripped the poles of the spear and halberd and tugged. The two bandits lost their balance and fell towards him in fear. A pair of iron-like arms awaited them and struck their chests like hammers. With two deep groans, the two bandits were both knocked away as blood spurted from their mouths.

Taking advantage of this time, the broad blade arrived near Li Qingshan. The icy-cold edge came in contact with his abdomen. It was about to pierce him through completely, but it was unable to advance an inch further.

Li Qingshan’s two palms slammed against the ears of the blade-wielding bandit. When he lifted his hands from the bandit’s head, the bandit crumpled to the ground like he had lost his soul, slowly bleeding from all of the orifices of his head.

Li Qingshan strode towards the third boss, but the battle cries around him had already become deafening. With a flick of his foot, he kicked up the halberd and held it in his hands.

There were no moves, no consideration. He only swept it.

The wild gust kicked up a semi-circular cloud of dust, rushing towards the bandits.

The tip of the halberd snapped, spinning through the air and stabbing into the ground.

A few weapons were knocked into the air, and a series of cries followed. Some people had tried to block, but they were unable to stop the devastating halberd.

The dust dispersed, and four bandits collapsed on the ground. Only a shorter bandit had his face slashed through, dying on the spot. The three other bandits had their chests cut open, so they all wailed out in pain. Blood scattered on the ground like it was worthless, the rich color flowing everywhere.

Li Qingshan glanced at the broken halberd and thought, What a horrible weapon, before tossing it aside. However, he had no idea how many sturdy bones and how much steel he had just forcefully cut through in the moment prior. It was impossible for ordinary weapons to endure such wear.

In the blink of an eye, eight bandits were dead or incapacitated. The bandits behind all stopped in their tracks as they cried out, holding their weapons. They were afraid of advancing forwards. The horrific sight of that instant had stunned them. The ordinary youth seemed to become a terrifying god of slaughter.

Li Qingshan continued towards the third boss. His face was emotionless as his eyes flickered with red light that even he himself failed to discover.

Meanwhile, he rapidly analysed the situation. He had not lost himself to anger. Here, only the third boss was a third-rate master, so he had heavily injured him with his first attack, removing the greatest threat.

There were a few martial arts adepts among the other bandits, but most of them were on the same level as the ginseng foragers. They had only practised some martial arts, which was enough to harass ordinary people, but it was definitely not enough to rival him.

I- I’m going to die here! The third boss endured his injuries and shifted towards the back, fearfully looking at Li Qingshan as he made his way over. Li Qingshan seemed like a demon in human form as mentioned in those legends, where he could suddenly transform and reveal his vicious fangs. No matter how many people were by his side, they could not save him.

“If I die, the entire Crouching Ox village will be buried with me. Don’t you know who my elder brother is?”

The third boss used this opportunity to climb onto his pony, grabbing the reins and riding off at top speed. Even without his orders, the other bandits all followed behind him. They even left behind the injured bandits.

Li Qingshan broke free from the grip and grabbed Li Long’s throat firmly. He lifted him up. “Do you want to die as well?”

Li Long struggled. “Y- you can’t kill a boss of the Black Wind stronghold. Have you heard of Under Elm village?”

“Under Elm village!” Caretaker Liu, who had collapsed on the ground and had been frightened half to death, suddenly cried out.

“What Under Elm village?!” Li Qingshan loosened his grip.

“Then are we supposed to just let them tread over us?” Li Qingshan growled.

“Qingshan, I understand how you feel, but we are all helpless given the current circumstances.”

“Then I’ll become even stronger!”

The expressions of all of the villagers changed. At this moment, all they heard was an extremely vicious promise the third boss left behind from afar. “Just you wait for the Crouching Ox village to be massacred!” Some people collapsed on the ground in fright as the cries and sobs began once more. There was no joy from repelling the bandits.

An injured bandit clutched his chest and smiled viciously. “All of you will die with me!”

“Are you done?” Li Qingshan asked.

Li Qingshan released Li Long and kicked the broad blade near his foot. The tip stabbed through the mountain bandit’s throat, immediately taking his life. “I never go back on something I’ve said.” Li Qingshan finished off the other injured bandits and turned back to the villagers. “Nothing will happen. I promise!” Afterwards, he strode off in the direction that the bandits had fled in without looking back.

The sun fell in the west, and the last ray of light vanished from the sky. Darkness descended on the mountains.

Around a roaring bonfire, two bandits helped the third boss pull out the arrow. The third boss groaned in pain, slapping a bandit away. “Can you be a little more fucking gentle?”

The bandit’s mouth bled from the slap, but he faltered, afraid to talk back.

The other bandits were all dejected. With the infamy of the Black Wind stronghold, it had already been a very long time since they had experienced a failure like this. They had already grown accustomed to gazes of fear and flattery. They were used to taking silver and women whenever they wanted to.

“All of you fucking liven up. We will have our revenge. Once I get my hands on that kid…” The third boss smiled viciously.

“We’ll cut him to pieces!” a bandit immediately answered.

“No, we’ll cook him alive. All of us will get a piece of his flesh. The taste must be…” The bandit who wanted to eat Li Qingshan had not even finished speaking when a bloody mark appeared on his throat. Blood spurted out, interrupting the bandit’s discussion on torture.

1. Polearm on the very right. 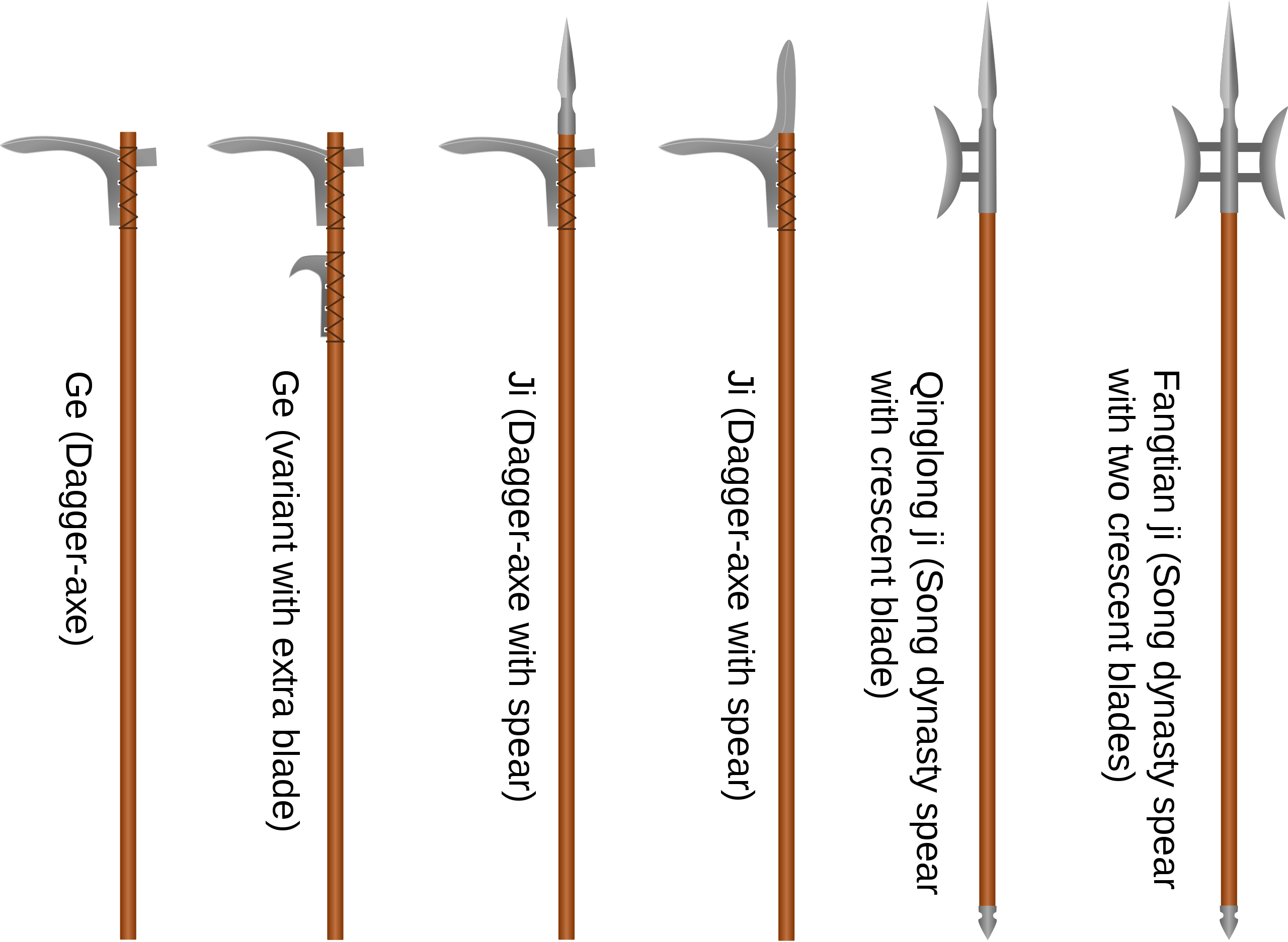